It may have originated from ancient festivals and religious rituals, Halloween is still widely celebrated today in many countries around the globe. In Ireland, Canada, and the United States, traditions include costume parties, trick-or-treating, pranks, and games and there appears to be a greater incidence of this mix of fright and fun catching on around the rest of the world too. From fancy dress parties to ghoulish zombie marches, to pumpkin carving and feeding frenzies where copious amounts of chocolate and candy are consumed, there are lots of reasons for this holiday’s growing popularity. This year the LiteracyPlanet teams around the world had some fun with their local communities and amongst themselves, while we embraced the spirit of the spooky season. We gorged on candy/lollies, put up some spooky decor, participated in a few events and contests, but nothing too scary. 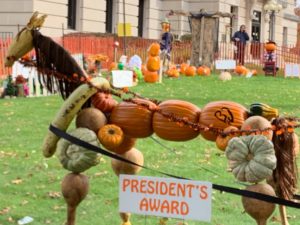 It was our US team that earned the LiteracyPlanet top nod for wholeheartedly embracing this monstrous celebration of all things autumn.  They carved out some time for fun and connecting with their local community at the Sycamore Pumpkin Festival #sycamorepumpkinfestival that just so happened to be taking place right outside our Illinois office.   The historic Sycamore Pumpkin Festival saw thousands of painted and carved pumpkins decorate the courthouse lawn and had food vendors dish up pumpkin pie, caramel apples, and other fall favorites. There was also a pumpkin patch, two arts-and-crafts shows, carnival rides, a historic house walk, a 10K Pumpkin Run road race and a giant 2 ½ hour-long parade.  How’s that for a whole lot of Halloween fun?   Did you know? Some Harrowing Halloween Trivia:

Wishing you a Happy Halloween from all of us at LiteracyPlanet.